Andrew Livernois Doesn't Want any Publicity About His Misconduct 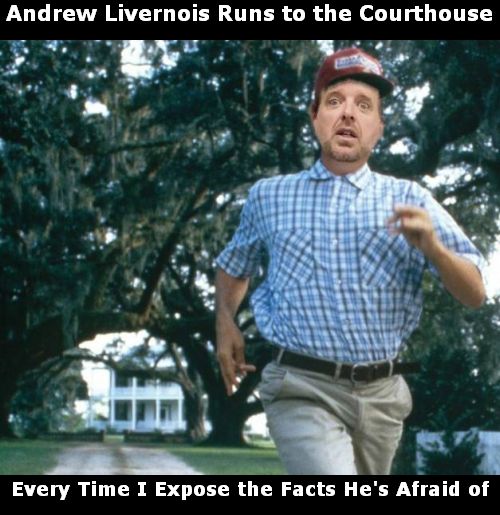 Belknap County Attorney Andrew Livernois is doing his best impersonation of Forrest Gump, constantly running. He is running as hard as he can from the inconvenient truths that arose from a case against me that never should have been filed. He is so incredibly scared of the truth that he had his assistant file a motion for a court order to prohibit pre-trial publicity.

I think it had something to do with this Letter to the Editor I wrote in the Laconia Daily Sun. I sent it to Livernois on Wednesday morning (May 20th), and it was no surprise he had a motion before the court by Friday before 10 in the morning.

Let the battle begin, I say. This is First Amendment law. I've been working within those parameters for my entire career as a self-represented party. I've been subjected to injunctions in multiple jurisdictions. My published work is still in place, all over the Internet.

The most laughable aspect of this latest motion by the prosecution team is the thin legal argument it is based on. Attorney Livernois refused to meet with me prior to my arraignment, because he felt not being represented by counsel would complicate matters. He suggested the only way we could meet would be to wait for arraignment or get a lawyer. Now, although I have not attended law school and did not take a single legal class anywhere, suddenly I am expected to follow the rules of professional conduct for New Hampshire attorneys in regard to generating publicity for my case.

I am being treated as if I am a full-fledged attorney who passed the bar and swore an oath. Why did my standing change so drastically in just a few hearings? Also, when can I take on new clients?

What's worse is the County Attorney and his young lackey Keith Cormier couldn't even come up with a single thread of applicable law to use as precedent cases. Cormier only cited two pro-se cases which had to do with those self-represented parties being required to abide by rules of procedure and motion practice. He does not have a single case in his pleading where a pro-se attorney was held to the same rules of professional conduct that a licensed attorney is bound to follow. The three First Amendment cases cited to supposedly prove a prior restraint is proper in this scenario are all relating to people who had practicing, licensed attorneys. There is no commonality, no similarly situated parties.

The most important question to ask here is why would a professional attorney like Andrew be all bent out of shape about a Letter to the Editor in the local newspaper? Why would he twist the law and seek to squelch the press if he had nothing to hide? Also, it is very interesting that the assistant county attorney refused to characterize my letter in negative terms.The most dismissive word he can find to use about my message is that it contained "brazen" claims. Well, excuse me for being brazen when I have 53 years of potential prison time hanging over my head.

The fact is, the truth is a very powerful force. I know from experience. I've ruined reputations and destroyed the credibility of financial criminals in my prior work as an investigative reporter. There are certain truths people are desperate to keep quiet. Some are just inconvenient patterns of thought or habits that people don't want their friends or relatives to know about. Other truths are deeper, more systematic, and more connected to waste, fraud and abuse.

The truth is coming out. Fact by fact, motion by motion, despite the delays and in spite of a biased and corrupt system of justice in this community. Stay tuned.
at May 26, 2020 No comments: