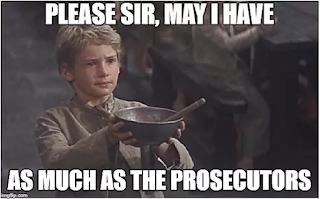 Nearly all of my pleadings in my criminal case pending in Belknap Superior Court have been accompanied by sworn affidavit. I've received only one order in my favor thus far, for a motion to suppress that went unopposed. Yet, the original prosecutor has somehow been able to get every request he's ever asked for from the judge with no such affidavits attached to his requests. The new prosecutor, Tara J. Heater from Grafton County, hasn't asked for anything yet.

Rule 35 (i) of the New Hampshire Rules of Criminal Procedure outlines the requirements related to motions filed in Superior Court. Subsection (1) reads as follows:

“The court will not hear any motion grounded upon facts, unless they are verified by affidavit, or are apparent from the record or from the papers on file in the case, or are agreed to and stated in writing signed by the parties or their attorneys; and the same rule will be applied as to all facts relied on in opposing any motion..."


These rules are made to be broken, and it happens all the time. Attorneys are part of an exclusive club. Judges used to be part of the same club. People who represent themselves are fools, whether the evidence supports that conclusion or not. It's just sort of a known judicial fact with the majority of judges I dealt with in my writing career. It turns out that every time they think that old token wisecrack is true with me, they find out they are sadly mistaken.

The legal profession is in enough hot water as it is without the "defund the police" movement putting such a white hot spotlight on abuses of the justice system. The perfect legal storm that this case was already just joined up with a tornado, even despite the fact that the prosecution decided to withdraw their gag order request. Even without the support of the ACLU lawyers who wrote their brief on my behalf, I filed a sanctions motion, and I'm waiting to find out when the hearing will be and whether there will be witnesses allowed.

Despite my earlier promise to publish the entire sanctions motion, I've changed my thought process on that. There are sensitive matters contained in the motion and the response. Some of them have already been published elsewhere. The last thing I want is to have any member of the press put out information that is not accurate. The pleading and supporting evidence was somewhat complex. It's tough to break down into a typical newspaper article and get all the details correct.

The reason I have to be cautious is the most recent newspaper report on this subject left out a great deal of much-needed context. I am trying to be as fair as possible to the judicial process at this point.

My motion and reply also deal with some very basic principles and circumstances I will discuss here. The cover up is worse than the crime. It is the way they did all this legal maneuvering that's really suspicious. There was a little bit more detail about the Grafton County takeover revealed in the latest filing from Attorney Heater. Attorney Livernois apparently took himself off the case on July 7th. Heater admits in her opposition filing that Rule 3.6 of the NH Rules of Professional Conduct for New Hampshire Attorneys does not apply to me. Still, she persists that Cormier was only using the motion for a gag order to try to change existing law or make new law. She also insists that since my "vitriol" was focused directly against Livernois, it was a mere strategy to withdraw the gag order request and had nothing to do with the motion's lack of good faith.

The contradictions in Heater's objection to my motion for sanctions are not few and far between. One bombshell she drops is her insistence that only the Attorney Discipline Committee has the authority to do anything about violations of the Rule of Professional Conduct for NH Attorneys. Yet I have it in writing that this committee would be more comfortable acting on my grievance if the judge admonished the attorney first for the same behavior. Nuff said.

Attorney Heater adds a new level to this saga by extending the fraud upon the court. She uses the same tired cases and arguments that were already debunked. She insists this is suddenly a case of prosecutors trying to make new law at the Superior Court level when the real basis for their motion was not a law at all. They would need to change a rule to make their argument legitimate. This is not about changing or making law. This is about hiding from the truth.

Livernois and Cormier engaged in a CYA (Cover Your Ass) campaign here. Attorney Heater got recruited to play the new girl, "good cop" role and failed miserably thus far. These prosecutors were so confident that they thought they could print lies and have the judge sign off on them and give them a gag order against me that was not supported by any viable legal framework. Blind loyalty and lack of accountability are also symptoms of a virus that can be as deadly to justice as Covid-19 is to humans.

The Attorney Discipline Committee is still weighing the prospect of docketing my formal grievance against Livernois and Cormier. I will definitely publish those materials once a docketing decision has been made. I will also publish the full audio of the upcoming hearing here when I get a certified copy. Stay tuned!
at August 02, 2020 No comments: