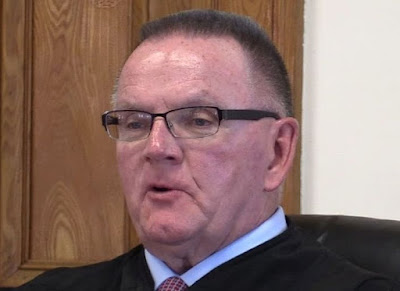 Judge James D. O'Neill III ruled against my motion for sanctions in his latest order in my case.

He also laid out a roadmap for what would be needed to secure a better ruling on such a motion. He cited minimal points of law and fact, and the ruling itself did not reflect any research or careful consideration, unfortunately.

Even though Judge O'Neill had over a month to review all the material after the September 9th hearing, this ruling seems rushed and slapped together quickly.

It's as if someone had to remind him he'd forgotten about this particular motion. Coincidentally (or maybe not), I emailed Deputy Grafton County Attorney Tara Heater the day before his ruling came down. I told her I thought Judge O'Neill knew he had to do something in this scenario and that was what was taking him so long. I also asked for a key piece of discovery. I wanted any and all communications regarding Belknap County Attorney Andrew Livernois removing himself from my case. I got this:

This particular document says it all. Andrew Livernois panicked after the ACLU agreed to write an Amicus Brief on my behalf. He and his deputy were under fire in the press, and he couldn't stop it. Instead, he figured he'd just change the target, and I would leave him alone. Livernois obviously had conversations with Heater and her boss Martha Ann Hornick. Then he dumped the case on them without any sense of this being a random assignment. This document shows it was all approved by the State of New Hampshire's Attorney General: Gordon MacDonald.

What was the first thing Deputy Grafton County Attorney Tara Heater did after Livernois talked to her and her boss? Her first act as a prosecutor on this case was to withdraw the gag order request. Livernois and Cormier knew they were going to lose if it went to a hearing. Rather than tuck tail and retreat on their own, they forced another prosecutor to be brought in to engage in the coverup. That prosecutor then immediately drops the whole gag order request with the lame explanation that it was only a matter of "strategy" and not a matter of the motion having no merits.

Lo and behold, when I filed my motion for sanctions, Attorney Heater also made the argument that Livernois and Cormier were trying to make new law with their gag order request. The whole basis for that request was based upon my breaking a RULE, not a law. The request was unconstitutional. It was overbroad, and it was not narrowly restricted at all. The more they try to cover up this mess, the more they all implicate themselves in even MORE misconduct. The paper trail doesn't lie.

These are not the actions that state employees should be engaging in if their interest is really in promoting any semblance of true "justice."

From here my "strategy" is simple. I will file an amended motion for sanctions. I will make sure it is ironclad, addressing all of Judge O'Neill's superficial concerns. It will be concise and comprehensive, naming exactly what sanctions should apply, what authorities there are to back up such sanctions, and why it simply does not matter that the gag order was withdrawn by a new attorney at the 11th hour. The argument that pulling back from that hearing did not compromise my case in any way is also about to be thoroughly debunked. The motion that results will be one that Judge O'Neill will either feel obligated to act on out of his unbiased dedication to being fair and impartial, or he will simply bury it out of loyalty to the state and the current governor's anti-marijuana stance. He'll use no law or research to do so and will issue an even more opinionated and weak order than the last one.

Judge O'Neill has been ruling against me religiously, constantly trying to remind the court of my pro-se status, and continually ignoring affidavit evidence in order to favor the prosecution. I even have it in writing that Attorney Livernois knew Judge O'Neill trusted him more because of all the times he's appeared before the judge. It's a rigged system as it is, but as soon as I threatened a civil suit upon the event of an acquittal (in open court), the whole landscape changed. The real coverup and the most coordinated effort to railroad me began at that very moment. It was me against the state from the jump, but after that threat it really became me against THE STATE.

I'm not intimidated. If Judge O'Neill continues to ignore the law and precedent cases and legal statutes and affidavit evidence, I will have no choice but to ask for his recusal. If he will not police his own courtroom adequately and penalize these officers of the law for abusing their authority and misrepresenting the law and the facts, he will force my hand.

If the circumstances don't change, I will file a judicial complaint against him and contribute to the next congressional bill to force him out of office. Recusal is not my only avenue of relief if he will not do the job he was sworn to do with fairness and impartiality. I will keep the whole system honest.