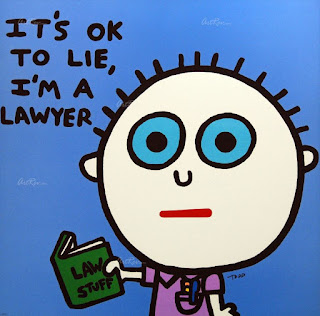 "Lawyers occasionally stumble over the truth, but most of them pick themselves up and hurry off as if nothing had happened."

Q. How does a lawyer sleep at night?

Q. How can you tell a lawyer is lying?

A. His/Her lips are moving.

We've all heard the jokes about lawyers and their reputation for lying religiously. Lawyers often lie to their clients. Some more bold attorneys lie in court, and some even lie to the media. So, it may shock you to know that in most states in this country the rules of conduct for practicing attorneys include stipulations that make dishonesty and deception a punishable offense.

So how do so many lawyers still get away with being filthy liars? The simple answer is attorneys rarely get called out for misconduct. When they do find themselves accused of violating rules of conduct or procedure, attorneys hardly ever get punished with any meaningful sanctions.

The power wielded by prosecutors makes their transgressions even tougher to crack down on. Yet there are specific bar association standards that would have you believe most prosecutors are held to even higher ethical standards than regular attorneys. The truth is more disturbing than you might imagine.

My second sanctions motion against the prosecutors in my case proves beyond a shadow of a doubt that "the coverup is worse than the crime." I lay out what amounts to a pattern of lies and misrepresentation covering two of this state's counties (Grafton and Belknap) and perpetrated by four of their top attorneys (Andrew Livernois, Keith Cormier, Martha Ann Hornick and Tara Heater). My affidavit supporting the new motion connects all the dots with concrete evidence.

The whole saga started with a sloppy request for an order to prohibit pre-trial publicity. Deputy Belknap County Attorney Keith Cormier filed the motion after I sent an email to his boss. The email, sent only to County Attorney Andrew Livernois, included a link to a letter to the editor I authored about this case and Livernois' misconduct. the Laconia Daily Sun printed my letter after refusing to run an advertisement for www.andrewlivernois.com. They encouraged me to write a letter to the editor instead, implying if I did so, they would publish it.

Two days before I baited the county attorney into a revenge move with that published letter, he offered this plea agreement in another email sent to me on May 18, 2020:

"On a plea to one felony count I would offer 12 months in the HOC, fully suspended on three years’ good behavior, with two years of probation, and a LADAC evaluation and follow up treatment as recommended. "

I immediately refused the offer and told Livernois to get his ducks in a row for trial. We have had multiple schedules for trial that did not pan out for various reasons. Most of those delays were driven by the prosecution. My arrest happened on February 28, 2019. I've been waiting over two full years for my opportunity to prove my case at trial.

I also heard from my standby counsel at the time of that offer that nobody else was getting offers like mine, even with the Covid-19 situation shutting down the courts.

Andrew Livernois was so angry about being called out in the media that he obviously ordered his deputy to craft what they called a "Motion for Court Order Prohibiting Pre-Trial Publicity." Cormier wrote and filed that motion as hastily as he could, within a mere 48 hours from the sending of my email to his boss. This was exactly the reaction I was hoping for, especially since the motion that Cormier filed was so fundamentally weak. Rather than ask to prohibit only the kind of pre-trial publicity that would make seating an impartial jury impossible, Cormier asked to block "all pre-trial publicity." His other big mistake was insisting in the motion that the order was needed since I somehow broke a rule of attorney conduct that I'm not even bound to follow.

I imagine Attorney Livernois thought that it would at the very least appear to be personally motivated if he was the one who actually wrote the request to prohibit pre-trial publicity. Yet, that did not stop him from advocating for the motion personally in the media. You see, the very request from the Belknap County Attorney's office to prohibit pre-trial publicity actually expanded the publicity aimed at Livernois and Cormier. It was a fabulous episode of firing a big cannon at the opposition only to realize that the weapon is not fit to fire and instead explodes in your face. Livernois himself eventually made ill-advised comments to the Laconia Daily Sun about the request, and that move made the filing of a grievance with the Attorney Discipline Committee the logical next step.

Even the Union Leader newspaper featured a report about Belknap County's lame attempt to silence me. Despite the fact that I knew Livernois would react out of spite and anger to my emailing him the letter to the editor, I never imagined two newspapers would be following the saga so closely.  The Laconia Daily Sun also published a piece about the ACLU's intervention in the case with their Amicus Curiae Brief. I ended up writing a few more letters to the editor as well. All of them were published.

I noticed from that point on, Livernois clammed right up. Suddenly he would offer no comment to the press about anything related to the case. The whole situation obviously caught him off guard. I'm sure he's never had an opponent in court quite like me. Finally realizing he was stuck in a catch 22 and not wanting the gag order request to get to a hearing, Livernois removed himself from the case. He asked for a young deputy county attorney from Grafton County to take it over. The attorney general granted his wish.

Deputy Grafton County Attorney Tara Heater withdrew the gag order motion almost immediately upon being appointed to the case officially. She also asked if we could possibly meet and suggested she might have a more agreeable plea deal for me. I refused the meeting and the plea deal, which would have knocked down 6 felonies to a single misdemeanor. I want a trial, I told her. The only deal I will accept is I will sign an agreement giving up any right to sue the state in civil court if they drop all the charges before trial. So we wait for trial, because the State seems to think a civil suit will never get off the ground. I look forward to proving them wrong when I am acquitted.

Attorney Heater was extremely nice and receptive, but I couldn't help feeling like she was withdrawing the motion for the gag order to help Livernois. I didn't get the letter Livernois wrote when he quit the case until after the hearing on my first sanctions motion. I compiled the first sanctions motion specifically against Cormier and Livernois, but it was also a trap. I wanted Attorney Heater to defend the motion she just threw out and contradict herself in the process. I had no idea that she was actually supposed to be working under direct supervision from County Attorney Martha Ann Hornick until after I received Livernois' request to transfer the case in discovery. Accordingly, there was not much for me to include in the original sanctions motion about the misconduct of Attorney Heater.

Judge O'Neill struck the first motion down and gave me a roadmap on how to rewrite it, so I set about fixing the problems he pointed out in his denial order. I knew there was a missing piece to the puzzle, and I found it in the letter Livernois wrote about the transfer to Grafton County. It laid out the whole scheme of deception. Livernois tried to separate himself from the case while also making sure the gag order request didn't embarrass him and his office. Rather than write the request himself, he assigned it to his deputy. When the ACLU got involved and the whole thing looked like a big mistake, he re-assigned the case instead of filing his own withdrawal. It seems impossible to fathom that there was no discussion between Livernois and Heater about withdrawing the motion immediately upon her takeover. That was supposed to make everything appear like Livernois was never actually steering the ship when he most certainly was.

I don't know whether she did it because Livernois asked her to or out of some sense of loyalty to a fellow prosecutor, but Heater insisted that the gag order request was a good faith attempt to change the laws and rules regarding pro-se attorneys and pre-trial publicity. It was her only avenue of escape, and I knew it. The strategy worked perfectly, as she was forced to defend a motion she just asked to be thrown out. She also defended Livernois and Cormier without one shred of affidavit evidence illustrating any personal discussions with either of them. She made no sense in her objection to the first motion and absolutely phoned it in with her objection to the latest motion.

There's still not a singe affidavit to prove that Livernois and Cormier wanted to change the law. That's because  the truth is they just wanted me to be kept silent. They thought the judge would give them whatever they wanted. They never stopped to analyze the consequences of being wrong. Their excuses ring hollow now that they've been caught in the act of deception. My reply brief resulted in the second sanctions motion getting scheduled for a March 5, 2021 hearing date.

I have been working incredibly hard to seek every avenue available to me to bring these prosecutors down to Earth. I've tried to work with the Attorney Discipline Committee. They said they would be more likely to act if the judge in the case found the behavior to be improper. Yet, the judge seems afraid to really weigh in on whether this conduct is right or wrong. Typically if what you're doing is right, fair and justified, you don't go to such great lengths to keep it hidden from the press and the public. Unfortunately for all these bumbling prosecutors, the longer they insist this whole charade was true and just, the more they expose themselves to ridicule.

As it stands, this is by no means an honest prosecution. These attorneys lied and misrepresented the law. It is becoming easier and easier to justify filing a massive civil case against all parties involved here when the dust settles. From the dipshit detectives who couldn't read a criminal record properly to the prosecutors who dropped the ball time and time again, everyone who screwed up in this case should have to pay the same way I've had to pay. They should have to go through a long ordeal where they have to wait for years to know their ultimate fate. I can't be the only one suffering from these fatal flaws in our local justice system, and someone needs to take a stand against this rampant misconduct from our public servants.