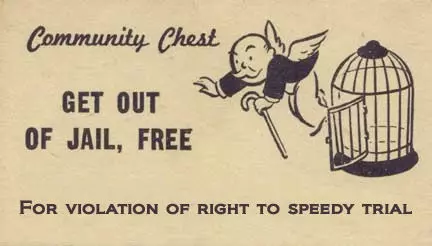 Speedy Trial rights are a fundamental part of the United States Justice System. I filed a fairly straightforward Motion to Dismiss my case recently based on the violation of these rights. I included these four exhibits:
Exhibit 1: Superior Court Speedy Trial Policy
Exhibit 2: Case Summary
Exhibit 3: Deputy Grafton County Attorney Tara Heater Says She's Ready for Trial
Exhibit 4: Bare Response By Attorney Heater to Second Motion For Sanctions
I had a strong feeling the Judge James D. O'Neill III would find some reason to deny this effort like he has with virtually every other motion I've filed. Initially, as required in the Speedy Trial Policy for the Superior Court, the state scheduled a hearing on this motion. Judge O'Neill cancelled the hearing with no explanation other than a cryptic notation explaining "hearing not needed." I had a good idea that this was not gong to end well as far as me getting any dismissal. At the time he was mulling the whole thing over he also received the news that my judicial conduct committee complaint against him had been summarily rejected by his colleagues.
Deputy Grafton County Attorney Tara Heater filed an objection to this motion to dismiss after filing no response at all to my request to recuse Judge O'Neill. The judge kept himself on the case anyway. Attorney Heater's multiple mistakes and failures to recall pertinent details of the case were only partially explained away in a quick "Motion to Amend" that she had to file.
I reminded Attorney Heater in my reply brief that she left a few other mistakes out of her motion to amend. I did also make a mistake in my own pleading, though. I didn't consider the motion to amend filed by the prosecutor to be a motion at all. I guess it seemed more like a confession to me. At any rate I insisted she was asking for a motion to be granted when there was no motion pending from the prosecution.
Although I had no reason to object to her motion anyway, it could have been an "assented to" motion that wouldn't need a judge's approval if I had a better relationship with the opposition. Unfortunately, I cannot trust anyone who would lie and initiate in a coverup as part of her entry into the case. This probably would have bolstered my argument on the idea that the delay represents "actual prejudice" if I had been able to raise it at the cancelled hearing. Her having to correct the record in the first place prejudices my case. I'm dealing with a prosecutor who doesn't know what she's doing and admits to needing the defendant's "help."
Judge O'Neill's order on the motion to dismiss ignored lots of legal points, valid precedent cases, and the facts revealed in the case summary about the behavior of the prosecutors. He considered all the 17 months of contested delays to be directly related to Covid-19 despite the record revealing otherwise. He even specifically stated at the first sanctions hearing that the Covid-19 situation was a "significant problem the state is facing."
The pandemic has never been a problem as far as me pressing my case. I've never seen it as an obstacle at all in meeting all my deadlines and appearing for all in person and remote hearings that were scheduled. The Covid-19 delays are the state's problem, as Judge O'Neill articulates so well in the above clip. The state should be worrying about more serious crimes and more dangerous criminals. They should be using this pandemic to jettison junk cases like mine, and instead they are treating me like I'm a threat to society. The state is instead only using this virus as a crutch, an excuse to engage in further incessant delay.
Judge O'Neill also made enough additional mistakes in his order to make for an excellent motion to reconsider. I will definitely be filing that in the near future.
I always have a Plan B for these scenarios (since it's always my expectation to lose every motion), but I definitely felt fundamentally wronged  by this latest order. I couldn't wait to draft a formal response for the courts that would adequately express my frustration. I felt there needed to be something a little more urgent. I decided another letter to the editor was in order, and the Laconia Sun put it in the centerfold spot right under the political cartoon in this weekend's paper:
Rich Bergeron: Judge's retirement will make way for justice | Letters To Editor | laconiadailysun.com
Stay tuned as this story develops. We are not done fighting this one by any means. I will not let this judge's bias and lack of ethics and morality stop my march to justice. I actually want a  trial, but I thought the state would want to take advantage of an easy way out. Now, since they refuse to dismiss the case, we'll see if they will actually schedule me for trial or subject themselves to another motion to dismiss on speedy trial grounds.
at August 07, 2021